The results of the 2019/20 SRC indeed give good reason for celebration with a total of close to 180 tons collected by the participating schools this year, compared to 132 tons last year. It comes as no surprise that paper made up the majority of the volume, given the nature of school work,  followed by glass, cans and then plastic. RNF Coordinator, Anita Witt: “The past year also saw some interesting and newsworthy developments, notably the addition of schools outside of Windhoek and the coast, these being two schools in Oranjemund and one in Rundu, which brings the total participating schools to 47. Also, Dagbreek School in Windhoek opened a 24-hour drive through/drop-off facility at their premises, which makes it easily accessible to the residents in the area after hours and over weekends.”

The sizes of the schools, according to Witt seem to play a small role in their success, as the number of learners range from 1200 (David Bezuidenhout Secondary School) down to only 37 leaners at the Child Intervention and Disability Support (CIDS) centre, and still they manage to collect and divert a considerable volume from being sent to landfill.  Witt: “It is clear that the enthusiasm and input of a teacher or principal to drive and keep recycling active contributes greatly to a school’s success.  It is also evident that amongst the winning schools, involvement and interaction with the learners’ families and the surrounding communities, play a significant role”.

With the RNF’s annual SRC now in its 10th year, the ongoing commitment and support from RNF members that sponsor and support the SRC has contributed greatly to its continued growth and success. Namibia Breweries Limited (NBL), a subsidiary of the Ohlthaver & List (O&L) Group, remains the sponsor of the N$10 000 cash prize for the winning school, followed by prize monies of N$5 000 sponsored by Collect-a-Can for the runner up, N$2 500 sponsored by Plastic Packaging for 3rd place and with the 4th and 5th places receiving N$2 000 and N$1 000 respectively, courtesy of RNF partner, Rent-A-Drum. RNF member BEE Biofuel has sponsored hand sanitizer, surface sanitizer and antibacterial hand soap to each of the winning schools, which will be most welcome to ensure that the schools adhere to the sanitation requirements upon return of the learners in August.

Môreson Special School walked away as winners for the second consecutive year, increasing their volume from 30 to 38 tons in the current year.

1st Place
Môreson Special School (38 tons)
A winning team and well deserved of the title of Namibia’s #Recycling Heroes 2020!  Celebrating their second in a row win of the Recycle Namibia Forum’s Schools Recycling competition, the photo below shows Carl Smith on the left, who is in charge of the recycling programme of Môreson Special School, together with teacher Kopei Murangi.

2nd Place
Dagbreek School (32 tons)
Pictured on the photo below are Elias Mariu and Martin Mukwangu of Dagbreek School for the Intellectually Impaired. They are in charge of the recycling program at their school, notably the new “drive through drop-off” recycling point which has greatly contributed towards a total collection of 32 tons of recyclables in the past year.

3rd Place
David Bezuidenhout Secondary School (13 tons)
On the photo below are teacher Wisdom Asrevi on the left, and school principal Wilbard Mbeeli.

4th Place
DHPS (12 tons)
Tina Crueys and school principal, Kristin Eichholz were photographed while receiving their prize.  After an absence of a few years, it is good to see DHPS back in the Top Five, with a commendable 12 tons collected over the past year.

5th Place
CIDS (7 tons)
A commendable achievement bearing in mind that CIDS Centre (Child Intervention and Disability Support) only has 37 learners, and have managed to collect 7 tons! On the photo below are teacher Eugenie van den Berg and learner Christiaan Venter. 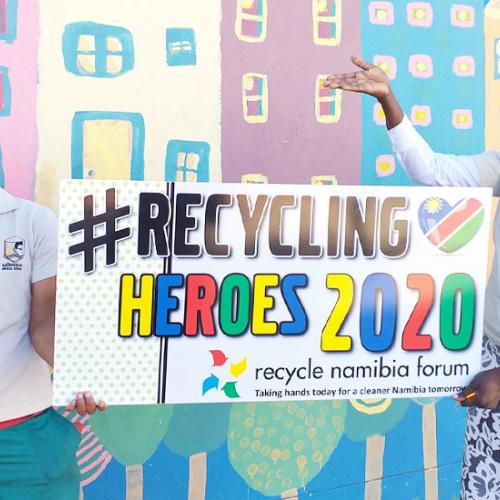 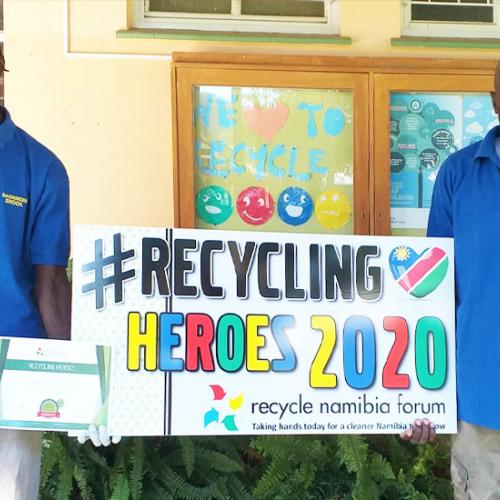 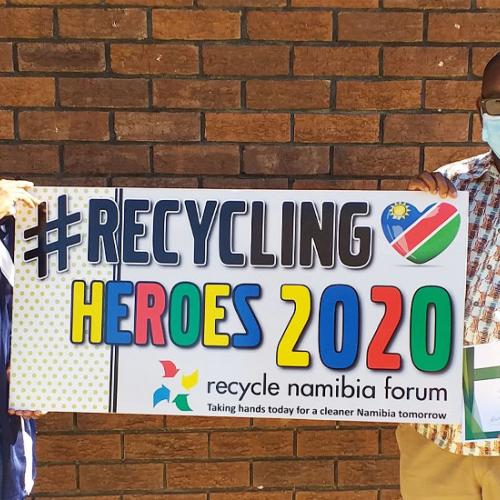 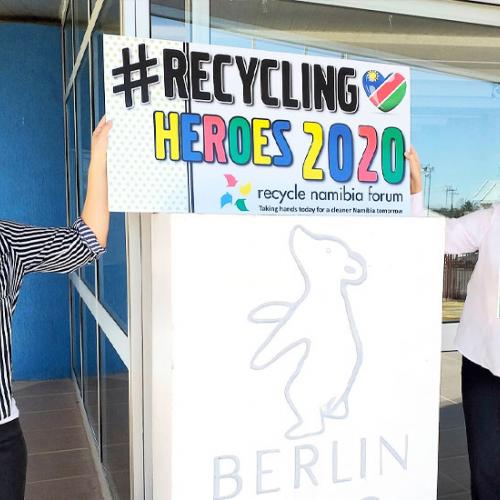 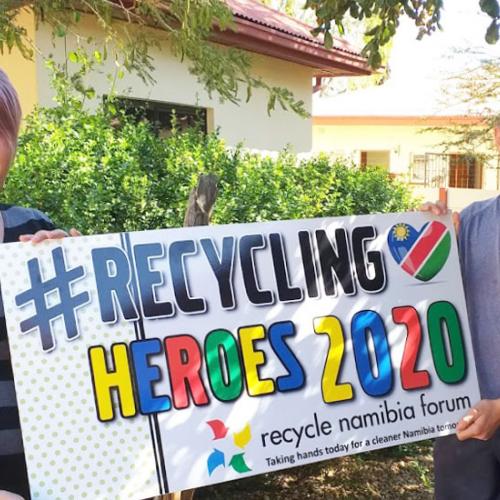 One of our top performing schools in our Recycling competition, Dagbreek School for the Intellectually Impaired recently introduced a drive through / drop off facility for recyclables at their premises in Klein Windhoek.

This school, which serves as a "collection hub" for not only the usual recyclables (plastic, glass, cans and paper) also offers collection bins for the safe disposal of other items, such as e-waste, used household batteries and light bulbs.

The Million+ Plastic Recycling Revolution is a new campaign that aims to mobilise more than one million South Africans to commit to recycling their plastic packaging.